Ballinlough is a small but active suburb of the city of Cork.

An Taoiseach Micheal Martin has lived here for the last 20 years.

It’s located within walking distance of the city centre but also the neighbouring suburbs of Blackrock and Douglas.

This accessibility is one of the highlights of Ballinlough as there is so much within walking distance but there is also right beside the South Link Dual Carriage way allowing you to quickly get around the city.

Every possible amenity is at your finger tips here so check them out below!

Ballinlough is a 20 minute walk from Cork City Centre but also from the neighbouring villages of Blackrock and Douglas.

The following bus routes run through Ballinlough allowing access to the city centre and many of it’s suburbs.

The nearest train station is Kent Station in Cork City Centre. This is within 30 minutes walk of Ballinlough or is available via Bus & Taxi

The name Ballinlough comes from the Irish Baile an Locha, meaning “town of the lake. It refers to the towns vicinity to Lough Mahon. The history of Ballinlough is very rich with a bronze age Standing Stone to be found on the grounds of Ballinlough House.

Up to the 20th century Ballinlough was mainly farmland with it’s main purpose being to supply food stock for the local markets but with the city expanding east and the town expanding west they soon met together and the remaining fields were developed and the town of Ballinlough officially came under the jurisdiction of Cork City Council in 1966.

For more information on the history of Ballinlough check out this great article by Cork Independent.

Some of the top local attractions in Ballinlough are the Ballinlough Park & Faery Trail and the Japanese Gardens. Of course Ballinlough is also a short trip into the Cork City centre where one can experience the English Market and the other features of the city.

There is a rich history of sport in the Ballinlough area. The largest sport facility in the area is Páirc Uí Rinn, a local GAA stadium. Here you can catch the best quality of intercounty hurling and gaelic football games.

There are also plenty of other facilities such as AIL division 1A team Cork Consitution Rugby Club, the Gus Healy Swimming Pool, Ballinlough Pitch and and Putt Club, The Orchard Squash Club and Ballinlough Tennis Club.

The 38th/40th Cork Scout Group is based in Ballinlough Community Centre as are many Bingo nights, Bowls and the local Youths Club.

Ballinlough is served by three fantastic bars, The Briar Rose, The Silver Key and the Orchard Bar. They offer up a great supply of local and global drinks and spirits as well as a great place to catch up with friends. There will also soon be a tasting room and gin school in the nearby Rebel City Distillery so make sure to check that out!

For Coffee and Treats go no further than the Bean Brownie Bakeshop or for something more substantial you can’t go wrong at Il Primo restaurant or the grill at the Briar Rose.

There is also a fantastic off licence section at the JJ O Driscoll Superstore.

When you need some fast food to recover you can’t do better than the Golden Fry, some locals say it is Cork’s best chipper, or some chinese cusine check out the amazing ManFu House.

Ballinlough is also served by Deliveroo, Just Eat and other takeaway services from Cork city!

Ballinlough is also ideally placed for Cork’s many nightclubs and late bars only a five minute taxi away!

The people of Ballinlough are very welcoming and open to members of all religions and none.

Ballinlough is the location of a Roman Catholic parish which is based in Our Lady of Lourdes Church and also home to the Wesley chapel of the Cork Methodist Church. 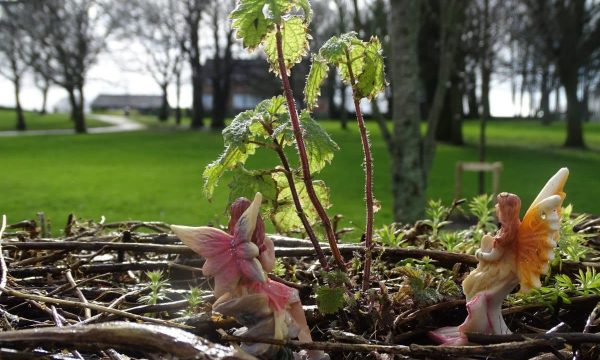 Favorite
Attractions
Boreenmanna Rd
Ballinlough Community Park is a super place for walk with the kids or your four legged friend! The award winning Olde Ballinlough Faery Trail has been relocated here in recent years. Come & see their faery houses & village and also the beautiful mural at the beginning of the trail. It is a safe haven that just need to be experienced.